View source How to edit Edit on GitHub

The ultimate explanation of optionSplit¶

Is there something still missing?

The FAL Reference has landed¶

Until recently the File Abstraction Layer Reference was pretty much an empty husk and users had to rely on a wiki page which was not always up to date.

I have completely restructured the FAL Reference, with TYPO3 7 LTS as a target version. I have completed every chapter and integrated everything that was relevant from the wiki.

Please now use this official manual as reference and submit changes via pull requests. The wiki page has been emptied.

I did a bigger change to the type=flex docs in TCA reference. I hope all the complex stuff is explained a bit better in detail now. See TCA, Pointing to a Data Structure.

TYPO3 CMS v8 comes with a new database API based on doctrine-dbal. The core code has been fully migrated over the past months consuming uncounted hours of community work.

Documentation of doctrine-dbal API within the TYPO3 ecosystem has just been added to the official TYPO3 API documentation explaining all important blows and whistles ready to be used since TYPO3 CMS version 8.3.

Extension authors are encouraged to switch their own extensions to the new Doctrine based database API. It comes with a much better abstraction of different database platforms and it is an important foundation of further evolution. Don’t hesitate to push your database queries to this new level.

Contribute: And don’t hesitate to use the “Edit me on Github” button to improve the documentation.

The TYPO3 Frontend Localization Guide manual was purged of many of its old parts this spring by Christopher, but still remained out of date, in particular with regards to screenshots. It is now fully up to date again for TYPO3 7. It is also restructured, reflecting the fact that it has less content than before.

And now that it has proper anchors on every heading, I plan to add relevant cross-links to it from quite a few other manuals.

Admitted: This is an information for the very advanced reST user. But it’s cool! I’m talking of t3SphinxThemeRtd. Usual pages are rendered from an html template page.html. Now there are two more templates. sitemap.html will fill in a complete sitemap after the contents. And extensions.html fills in the javascript driven search. The logic is in the module code of t3SphinxThemeRtd. It now has a new setup() function that makes it a valid Sphinx extension as well besides being a theme. And in our conf.py we are loading t3SphinxThemeRtd as a Sphinx extension. As a result the file-wide-metadata of each document is checked. And if there’s a field template its value is used as templatename for the rendering of that document.

Are you still there?

The TYPO3 Services References manual is finally up to date again (for TYPO3 CMS 7). What’s more it contains a whole new chapter about authentication services. This chapter also describes the TYPO3 CMS authentication process on a very general level, the focus being on services.

At Martin’s request - and after an exchange of ideas - I worked on improving the content and layout of the docs.typo3.org home page. This new version should be more useful and includes a side panel with information for newcomers to TYPO3 CMS.

All others pages were also reviewed and quite a few were restructured and improved, or placed in a more logical structure. This has largely improved the main navigation on the left.

If you want to give some feedback, the best way is via the “typo3-documentation” Slack channel.

The Inside TYPO3 Reference is finally up to date for TYPO3 CMS 7. A lot of content was fully rewritten, while many obsolete parts were removed.

Several issues with the theme are fixed now. And the README of the repository now has a pointer to the DEMO DOCS t3SphinxThemeRtdDemoDocs which are kind of a “stresstest” for the theme and demonstrate what’s possible.

New: A .. rst-class:: panel panel-default right before a section (headline) will give it a Twitter-Bootstrap -like “panel” styling as you can see on this page with the latest news.

New: The theme is version 3.6.0 now. Get it the regular way from PyPi by doing:

The TypoScript Syntax Reference is now up to date again for TYPO3 CMS 7. It was partly restructured to remove redundancies and globally make for a more consistent reading. Some obsolete parts were dropped.

The TypoScript Syntax Reference is coming along in the new theme now as well.

The TSconfig Reference now has the new theme as well.

The Templating Tutorial (Basics) is now up to date again. More than refreshed, it was really refactored. This tutorial was accompanied by files delivered via the extension called “doc_tut_templating”. I have now made this extension into a distribution, which makes it possible to deliver not only the files but also a basic page tree with a few content element. This greatly simplifies the early steps of the tutorial, which were redundant with the Editors Tutorial. I have reworked a lot of the content, which was quite verbose. It is now often shorter and more to the point. I removed the chapter about “optionSplit”, which was confusing, and referred readers to the TypoScript Reference instead. This ended up being a lot of work and this time I used all the time I had planned in this budget milestone. https://forge.typo3.org/news/799

Yippie, we have a new guide: 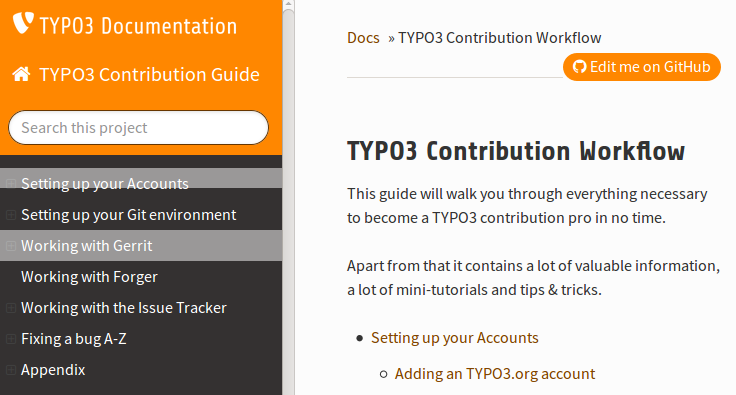 What are the new namespaced classnames that replace outdated old ones of TYPO3 v4? You can now find the answer in the documentation. 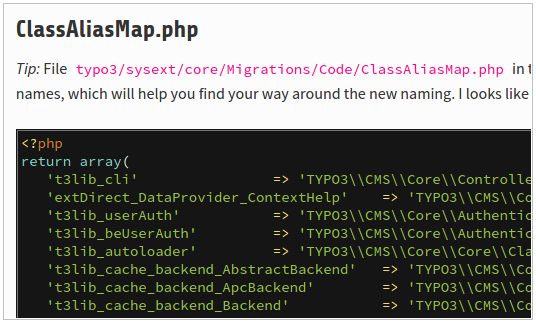 The Surf manual has been moved to a new location. Old links get redirected.