View source How to edit Edit on GitHub

The menu of TYPO3 Explained was considerably changed during and after the Initiatives Week 2020.

The main goal was to make it easier to find and jump to a general topic.

To see the "old" menu, look at the 6.2 version but please keep in mind that a number of additional chapter were added since then. Specifically, several manuals (such as CGL, Security, Inside TYPO3) were merged into "TYPO3 Explained".

Additionally, the menu was reorganized so that some smaller chapters are now available via a general chapter:

While the change was generally met with approval, it does still have some flaws and could use some more improvements.

For example, the menu is quite long which means you often have to scroll. If you are in a subchapter that is on the bottom of the menu (for example "Upgrade wizards") and you are reading a page, you have to scroll down to select a subchapter of the current chapter from the menu.

This might be improved, if some more chapters were merged into main chapters.

Additionally, now some small and minor topics are in the top level menu. This is usually due to the fact, that is not so easy to find a more general category for a chapter or it could easily be expected to be found in more than one category. Examples of these are:

These are some of the general navigational and structuring questions that need to be addressed.

What can you do to help?

The Snippets were available a number of years and have been helpful. But for quite some time, they were no longer being used much and no new Snippets were being added.

The main problem currently is that the manual was never versionized, so there is no way to see for which TYPO3 version the snippet applies. This makes it especially difficult for newcomers, while experts may still find the information they need and have no problem figuring out whether it applies to their TYPO3 version.

However, the Matomo results also show, that there is very little traffic to these pages.

Decreased activity may also be a reflection that people are now using other platforms, for example Stack Overflow or their own blogs to introduce tips, small snippets and examples and information on how to do things.

As advertised on the start page, the snippets were never meant to be maintained by the Documentation Team, which meant everyone was free to add their own snippets, there was no quality control or entry exam to complete. While this made it very open and inviting, it had the inherent problem, that there never was an official review. Since we now have other platforms where you can vote and comment (e.g. Stack Overflow) or have an author who stands behind the content and has an incentive to keep it up to date or people just know it is something with an expiration date and never meant to be kept updated (e.g. blogs) - these may be better suited for this type of content.

On the other hand, it is not easy to take down or deprecate content, people may find it disruptive and we hate to throw away content that was created by the community and that served its purpose many years.

Because of this open decision, an issue and a decision were created which addressed the question of "What to do with the snippets".

This is now the plan:

At some time in the future, we may also remove the rendered snippets and redirect to the https://docs.typo3.org start page. The archived repository on GitHub is still available.

Nothing was thrown away - it will just be less prominent in the future.

How you can help:

Don't hesitate to contact us on Slack in the channel #typo3-documentation.

A Fluid start page was created in "TYPO3 Explained". This reflects the importance of Fluid in TYPO3 and the multiple ways it is now used in TYPO3. A Introduction to Fluid subpage was added as well.

The Fluid page serves as an overview of various ways to use Fluid in TYPO3 as Fluid is now no longer used only in developing Extensions with Extbase & Fluid as was the case when it was initially introduced.

As next steps the documentation could be further restructured, moving for example general Fluid information that is not specific to Extbase / Fluid from the Extbase Fluid Book to "TYPO3 Explained".

We made several changes to the TypoScript reference and documentation for the topic TypoScript in general. 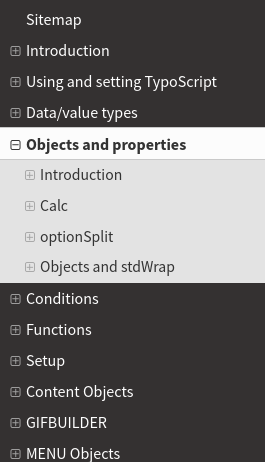 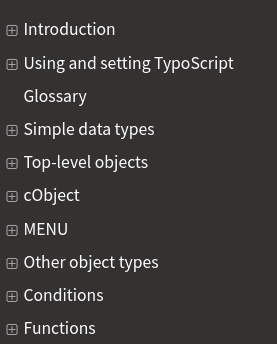 Menu before and after restructuring

If you would like to help with this, please look at the open issues.

When linking from one manual to another, we previously always linked to the latest (master) version of the manual. For example, if you were reading a section in "TYPO3 Explained" for TYPO3 version 8.7 and were referred to the "TCA Reference" by clicking a link, you would continue reading information for the latest TYPO3 version (currently, the not yet released as LTS version 10.2). Changes between TYPO3 versions are minimal most of the time, but significant in some cases (for example, see Changelog for 9.0).

This caused the following problems:

Reading documentation on docs.typo3.org should not require knowledge about such technical details. It should be possible to read and click, regardless of how the documentation is separated into repositories.

These problems were pointed out in the #typo3-documentation Slack channel, we created an issue and now changed the procedure, so that links across manuals link to the documentation for the same TYPO3 version.